Your browser is not supported. Please download another browser to be able to use all of the Maven features.

What Makes Some LinkedIn Posts Do So Well?

Want your challenge entries and LinkedIn posts to maximize reach to gain new followers and increase the size of your network?

Of course you do!

The larger your network the better your odds of new opportunities and interesting connections. HOWEVER, you don't need thousands of followers to make your reach skyrocket.

Let me show you how!

While tracking entries into the Queen's Gambit Challenge and recording relevant stats I noticed some entrants had an amazing number of reacts to their submission posts.

Take for example Ayushi Shrivastava who accumulated more than 300! 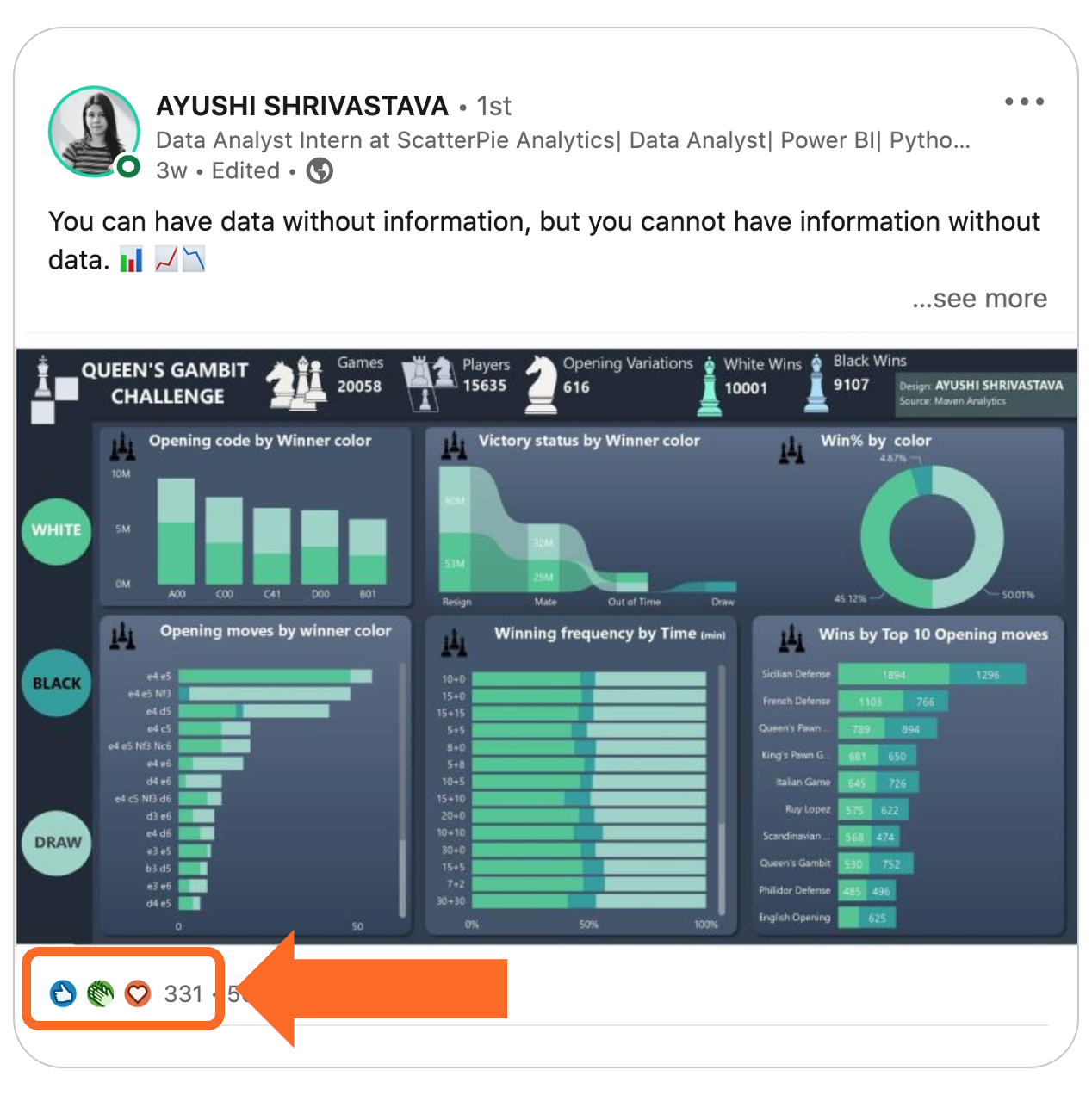 My gut instinct was telling me that these were probably members of the data fam with a larger number of followers hence the large number of reactions.

Who listens to their gut when they have this much data though? Certainly not an analyst!

I quickly got to work normalizing and profiling the variables in my dataset.

As you can see above for each of the 105 entries we received I recorded the following data points of interest: followers, reacts, comments, # of people tagged, and # of hashtags.

My metric to determine reach focused on reacts because it tells us that a person in-fact saw a post and did the bare minimum to notify the poster that they saw it. Reacts also wins the day as the main metric as opposed to impressions or views - which would provide much higher counts of engagement and would be much more impressive - but considering I don't have access to the posters’ impressions and it is questionable whether impressions accurately provides viewership, it is not a good option given these circumstances.

Here's how I tackled the modeling exercise...

The first step in proving my hunch right or wrong was to visualize reacts and followers as plots in order to determine what sort of relationship exist between the two variables.

As you can see by the trendline and poor R^2 there was no solid relationship between the number of followers an entrant had and the number of reacts their post received!

However, one strange thing stood out to me and that’s the four individuals on the upper left hand side of the plot. They managed to outperform fellow entrants who had a substantially higher count of followers.

What then best accounts for the larger number of reacts given their number of followers?

My gut was telling me at this point it probably has something to do with the number of people tagged and number of hashtags Clay, Vasanth, Eva, and Ayushi utilized in their post.

Examining my data once more I decided to create a correlation matrix and determine what sort of relationships exist between my data points.

You let me down again intuition!

However, there was a nice relationship between comments and hashtags….something to note and explore later.

Knowing these relationships exist between the data points I wanted to get a better idea of the strength of my highest correlated data points - reacts and comments.

As you can see a solid relationship exists between the number of reacts and comments.

I could have stopped here and called it a day but the analyst in-training within wanted to take things further. The next logical step was to determine if this positive correlation was also statistically significant.

Remaining within Excel one of the most efficient ways to do this and harvest additional information is through the datatoolpak’s regression analysis.

As the analysis shows comments has a p-value below 0.05 - this is a relationship that is both well correlated and statistically significant.

Thus far we know from utilizing our regression analysis that we can rely on comments to account for up to 63% of the variation in reactions.

How does this fit with what we know regarding how well the posts from Ayushi, Vasanth, Clay, and Eva performed? 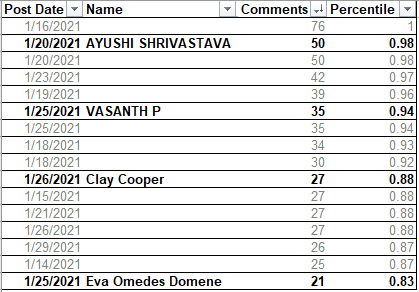 They had all done well with the number of comments on their posts. Ayushi and Vasanth were in the 90th percentile while Clay and Eva also performed admirably by being in the 80th percentile.

Now that we’ve seen promising correlations between comments and reacts which helped to propel the reach experienced by Ayushi, Vasanth, Clay, and Eva the question arises - how did they get so many comments?

Previously we saw a weak correlation for the group as a whole between reacts and both hashtags and number of tagged people.

In principle across the group this holds true but many of the tagged people in these high performers post’s either engaged in conversation or hit a react.

Further the average number of people tagged for all entrants was 3 while the high performers tagged 7. An increase of 65% over the average post. 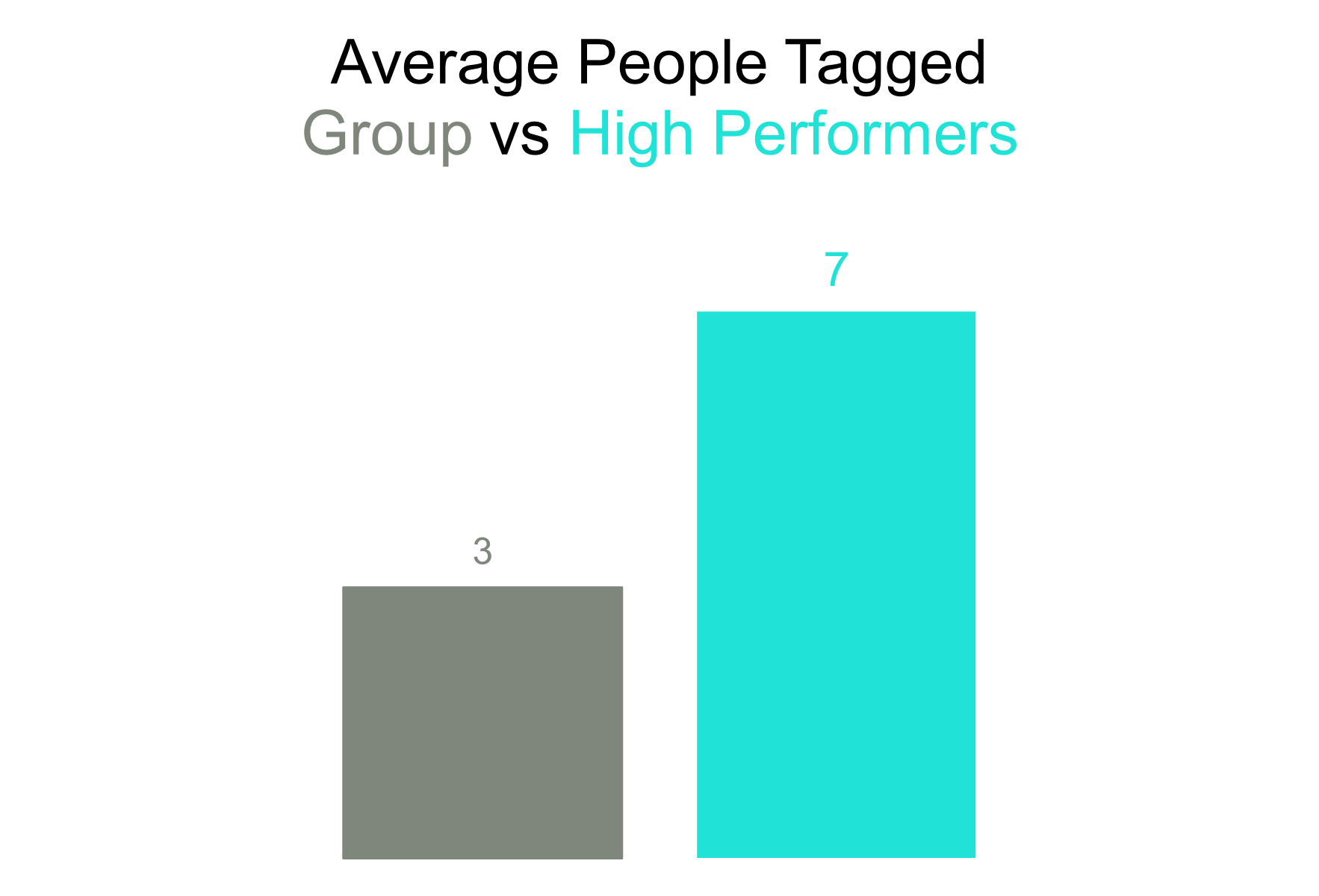 Regarding hashtags - there was also a major difference between the group and our highlighted four. On average the group posted 5 hashtags while the high performers posted 12. An increase of 54% 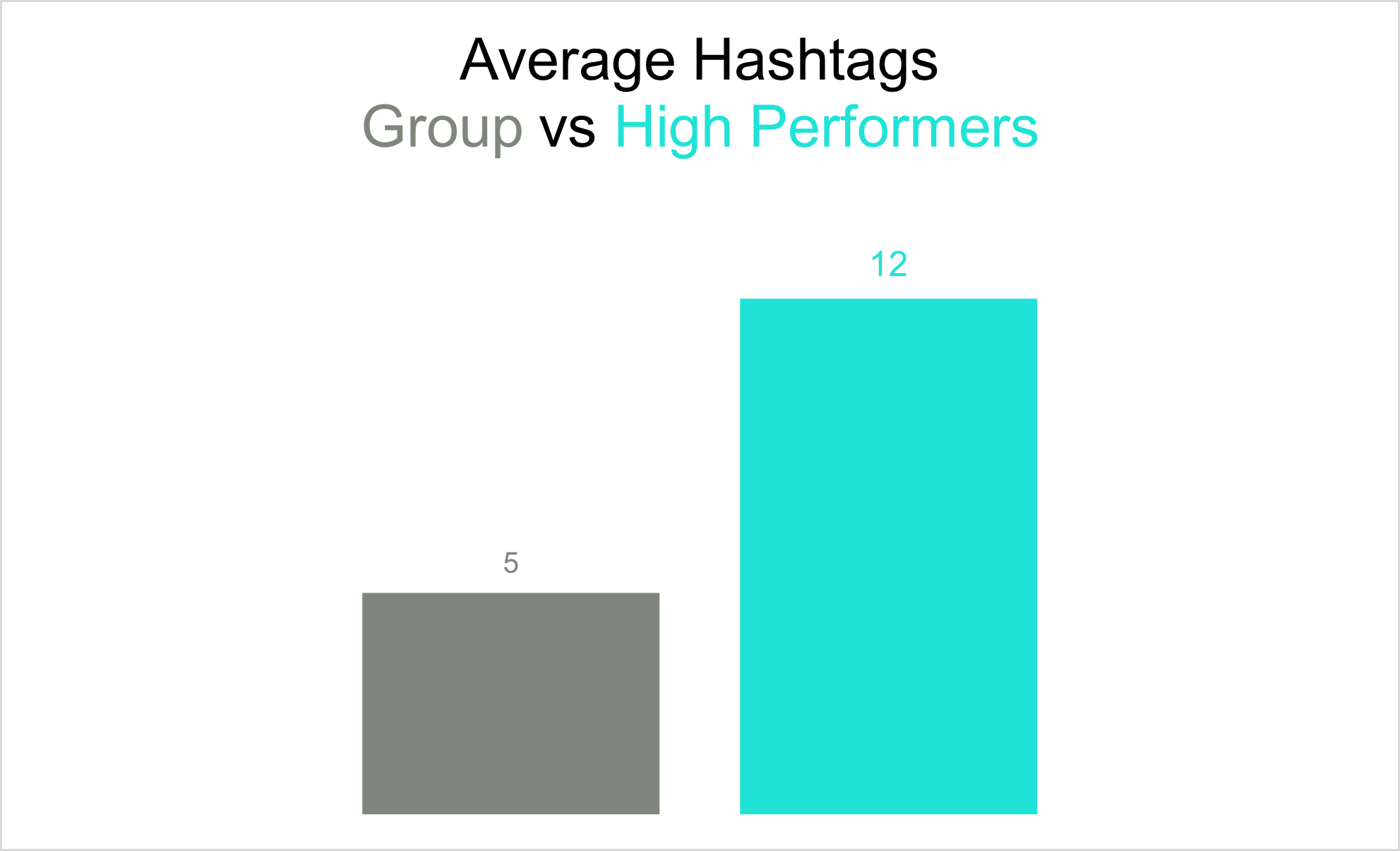 While bearing in mind that both of these variables were not highly correlated with reacts they still played an important part in our high performers drive to reaching high levels of reacts as we’ll shortly see in our takeaways.

At this point the relationship between comments and hashtags came to the forefront!

Reviewing my notes it came time to return to the correlation between comments and # of hashtags.

To speed things up I went straight for a regression analysis.

With my response variable now switched from reacts to comments we notice that the number of hashtags is statistically significant as a variable that explains variation in the number of comments per post.

A good find for us as this indicates the drive to reach is possibly scaffolded by first hashtags then comments then reacts.

Well, we’ve crunched a good amount of information and determined:

So, how do we ensure our posts maximize our reach and with any luck expand our network?

The above recommendations should drive engagement thus the reach of your challenge entry post and ultimately expand your network!

I hope you enjoyed reading this analysis as much as I enjoyed preparing it. There’s still much I have yet to learn and I’m still far from what I’d consider a highly capable analyst. Like everyone else in the Maven community I look forward to learning something new everyday and pushing the boundaries of my skillset.

On that note, what say you Maven fam? What would you have done differently or further explored while conducting an exploratory analysis on this data?

To get analytics tips & tricks delivered directly to your inbox.

Ready to become a